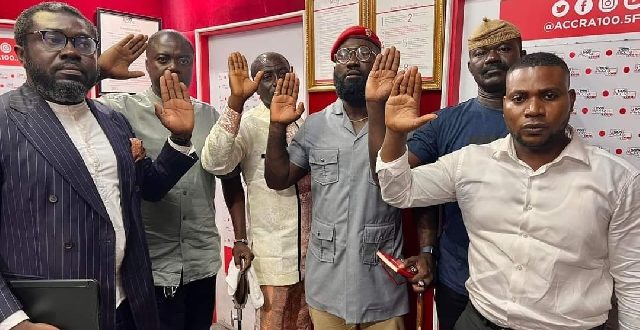 The Inspector-General of Police (IGP), Dr. George Akuffo Dampare has invited the organizers of the much-talked-about three-day demonstration with arms at the forecourt of the Ghana Broadcasting Corporation (GBC).

The organizers at an earlier press conference held in Accra asked the police to allow them to carry their own registered weapons during their demonstration over some injustices in the country.

The organizers in demand to the police argued that all weapons held by demonstrators or by the contracted security personnel will be for personal protection only, and all weapons will be duly licensed in accordance with the Arms and Ammunitions Act, 1972(NRCD).

However, the police administration last week secured an injunction restraining the demonstrators from embarking on their June 4, 2022, demonstrations.

Two members of the group under the name Arise Ghana, Mr. Mensah Thompson and Mr. Listowell Nana Opoku, respectively took to the Ghana Yensom morning show hosted by the sit-in host, Odehyeeba Kofi Essuman on Monday, June 6, 2022, to announce the invitation extended to the leadership of the group by the IGP.

According to them, they are prepared to meet with the IGP to hear what the police have in stock for members of the group over the decision to demonstrate.

“As a group, we are going to meet him (the IGP) to hear what he has to tell us in our quest to march against the numerous injustices under the leadership of the governing New Patriotic Party led by President Nana Addo Dankwa Akufo-Addo,” they said.