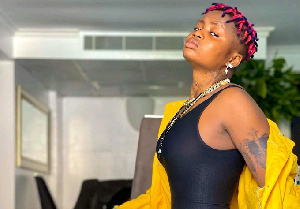 The up-and-coming actress and comedian who has become an emerging force became the conversation on social media after several videos of her engaged in sexual acts became public.

The videos were reported to have been released on WhatsApp and Telegram groups.

Clearly shocked by the development, Chully in a pool of her own tears wondered how videos were leaked. She continuously asked how and who leaked some of her private moments. She said in another recording that the recordings were made some years back.

While she was still attempting to calm the storm that had clearly overwhelmed her, social media was on overdrive. The majority of the comments included trolls while several others shared the leaked videos.

From Saturday to Sunday, the hashtag ‘Black Chully’ trended number one. It was only displaced on the trends on Sunday following the mass killing of some 50 worshippers at the St Francis Catholic Church in Owo – Ondo State.

A quick check on the microblogging platform on Monday, June 6 shows the hashtag is back at number one with more than 48,000 tweets.