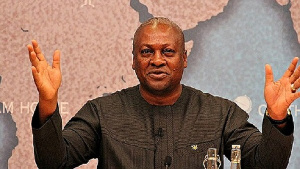 Former President John Dramani Mahama has justified the fight that occurred in Parliament over the E-levy, saying the Minority lawmakers were not expected to sit timidly to allow unconstitutionality to pass in the House.

He told the clergy who visited him that the constitution is clear on how proceedings should be conducted in Parliament. Therefore setting aside the right procedure was always going to raise eyebrows.

“If you get the details of our concerns you will understand the view from where we are coming from. I do think this meeting is timely, it is good to hear from all sides,” he said.

“By the time you have heard what we have to say you will realize that the problem is much deeper than what you think. That is why I have brought some of the MPs. That fight was a fight for democracy, there is no way a speaker can sit in the chair, relinquish the chair, let somebody else come and sit and take a vote in something that he has presided over.

“The constitution is clear, you take a voice vote, Is have it, somebody challenges it, it means we don’t agree with your choice so you must sit in the chair and do a division.

“It was felt that our MPs should sit timidly and let them pass this unconstitutionality, it won’t happen. I am happy that that rowdy scene has woken your consciences that you must intervene because there is a lot that is happening in this country that if we don’t intervene it will affect our democracy,” Mr Mahama further indicated.

On Monday, December 20 Members of Ghana’s Parliament could not hold their emotions as some exchanged brawls in the House just before the final vote on the controversial Electronic Transfer Levy Bill, also known as e-levy.

The sit-in Speaker, Joseph Osei-Owusu, had announced that a division would be followed to approve the Bill, presented under a certificate of urgency, and he was going to vote as well in his capacity as a Member of Parliament.

That appeared to have provoked the National Democratic Congress (NDC) members, who questioned his decision to vote after presiding over the night’s proceedings.

They moved to the front of the dais, issuing threats at the Bekwai MP.

This got the Majority MPs to also start agitations and immediately Mr Osei-Owusu handed the presiding role to the Second Deputy Speaker, Andrew Amoako Asiamah, the fight broke out.