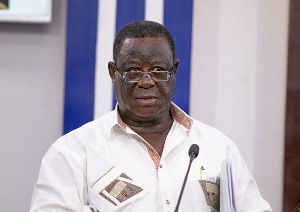 The first deputy Speaker of Parliament, Joseph Osei Owusu, has directed the Minister for Roads and Highways to furnish the house with the data on the total number of roads the Akufo-Addo government has constructed since assuming office.

This information, the Speaker indicated, should be put on the table by Friday, February 18, 2022.

Joseph Osei Owusu’s directive comes after the Roads Minister failed to state the exact number of roads the Akufo-Addo-led government has constructed since the assumption of office.

The Minister of Roads on Tuesday, February 15, 2022 was asked by MP for Effutu West to tell the house the total number of roads the Akufo-Addo-led government has constructed.

Responding to the question, the Minister said the roads project under Akufo-Addo is unparalleled, adding that he would answer the question if it’s formally asked.

“This is no problem at all, the data is there, come up with your questions and I will answer you and I can tell you that between 2017 to 2021 roads works undertaken by president Akufo-Addo government in this country is unparalleled. I will come with the information and statistics. Don’t even limit it to the roads, limit it to all other activities of the road infrastructure.”

When asked by the Speaker when the information can be presented to the house, Amoako-Atta said “At any time, whether day or night, at any time a question is put and the speaker admits it, that information will be provided.”

Previous I’m happy E-Levy impasse in parliament has woken your consciences – Mahama to clergy
Next FULL LIST: The most-watched TV station in Ghana