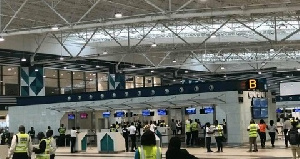 His comment comes on the back of news that Chinese galamsey kingpin, Aisha Huang who was arrested and said to have been repatriated by the State of Ghana rather sneaked out from the country.

The charge sheet for the prosecution of madam Aisha Huang has returned to Ghana after she was remanded indicated that she sneaked out of the country on her first arrest five years ago.

“During the year 2017, the 1st accused was arrested for similar offense but managed to sneak out of the country averting prosecution,” portion of the charge sheet reads.

But speaking on Ghana Kasa show on Kasapa FM/Agoo TV Thursday, Collons Kwadwo Amoah slammed the porous nature of the country’s point of entry which doesn’t allow effective screening of persons who enter the country.

He condemned the action of some irresponsible Immigration Officers at the Kotoka International Airport.

“Go to the Kotoka International Airport where passengers disembark and you’ll find Immigration Officers there waiting for foreigners. Instead of these foreigners being made to go through proper Immigration checks, these Immigration officers hold the hands of these foreigners and let them skip the queue and take them out of the facility. Why should this be happening at our Airport? All these things need to be checked, if not, we’ll continue to see the Aisha Huang incident playing out day in and day out.”