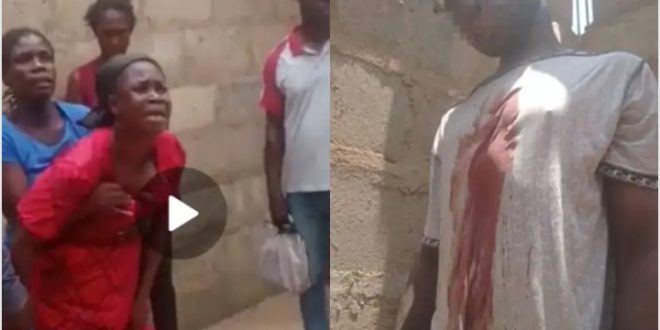 A man, whose name was only given as Kwame and believe to be in his early 30s has allegedly committed suicide at Dumanafo in the Kwabre East Municipal of the Ashanti Region.

According to reports, Kwame sent his younger child (daughter) with his sister just at her residence (Fawade) just yesterday before committing the suicide today.

The deceased, Kwame, committed the suicide in an uncompleted building with sponge and blood on his shirt.

It is alleged that he (the deceased) combined some leaves, squeezed and drank it leading to the vomiting of blood before his death since the leaves he allegedly squeezed was found beside his corpse.

The former assembly member for Dumanafo, Hon. Nana Yaa who confirmed the news to Bismark Mensah of Angel Tv News revealed that Kwame was a professional mason and carpenter but couldn’t confirmed what led to his untimely death.