Home / ENTERTAINMENT / It is cash and carry, I’ve no time for broke boys – Ruby of Date Rush It is cash and carry, I’ve no time for broke boys – Ruby of Date Rush 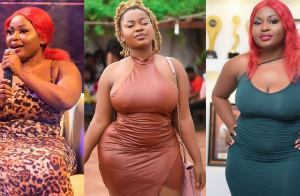 Ruby of Date Rush fame says that she cannot settle down with broke boys and only go into a relationship with men who are well to do.

The pretty lady made an appearance on popular dating program Date Rush and has since risen to fame.

She says that her body deserves a well to do man who can take her of her needs and not a broke guy.

According to Ruby she has her own money so will not settle for anything less.

During her appearance on the dating show on TV3, Ruby got a match in Powder Guy but their relationship was short lived as Ruby complained the guy was cheating after all the doggy style and gymnastics she performed in bed for his date.

Speaking to Zion Felix on his Uncut show, she revealed that she is a former student of Accra Polytechnic now Accra Technical University.

After much hesitation she also added that she is a student of GIMPA presently.

Tags AND CARRY CASH IS IT