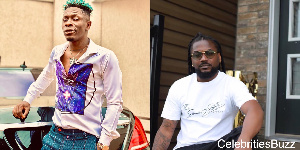 Shatta Wale has replied to Samini after he came out to say that Stonebwoy is a ‘Sellout’ and that he should have alerted him on his planned clash with Shatta.

Samini accused Stonebwoy of disloyalty because instead of him (Stonebwoy), Shatta Wale was rather the one who picked the phone to call him and explain everything on a planned clash between them.

“I expect you to hold my back and defend me like I do. When issues spring up, we cover it lowkey and talk and know how to handle things, that’s how I expect you to do things when they are going this way. I did not expect Bandana to be the one to call me or for me to see it online, Samini said in a video making rounds on social media.”

Shatta Wale has served Samini. He said the time he had wanted to clash with him, he said his brand was small. He also said Samini should have supported Stonebwoy publicly when their VGMA brouhaha popped up leading to their arrest.

Shatta added that is was very childish for Samini to cry out over their planned clash after they made peace months after their clash.