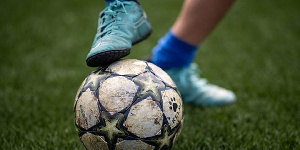 Ivorian footballer dies from falling off a moving train in India

A 24-year-old footballer died after falling off a moving train in West Bengal’s North 24 Parganas district of India on Saturday.

The incident happened when the victim, identified as Kouadio Mathieu, was on his way to Sealdah from Barrackpore when he suddenly fell off a moving train near Gandhi Prem Niwas in Titagarh.

Kouadio Mathieu passport showed that he is a footballer from Ivory Coast.

He was severely injured in the accident and somehow managed to drag himself to an ashram which was near the railway tracks, India Today reports.

A preliminary investigation revealed that the victim lived in rented accommodation in Barasat in North 24 Parganas.

The footballer was on his way to play a football match when the mishap occurred. Some locals took him to a nearby hospital where he succumbed to his injuries after two hours.

Police have started an investigation into the death of the player. The passport found in his pocket suggests that he was a football player from the Ivory Coast. Sources said the footballer used to play for several clubs in West Bengal for a long time.