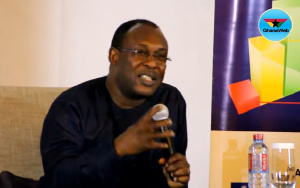 Vice President of Imani Africa, Kofi Bentil, has showered the Paramount Chief and the Agbogbomefia of the Asogli, Togbe Afede XIV, with praises after the latter refunded over ¢365,000 ex-gratia paid to him.

In a post on his social media handle, the lawyer eulogized Togbe Afede saying he has won his respect.

He suggested that Members of Parliament as well as others who benefit from ex-gratia and take from the poor over part-time jobs will equally develop conscience to follow suit with his gesture.

Mr. Bentil also opined that the characters of such persons who take from the poor make him sick when they pretend to be honourable.

“Dear Togbi Afede, You won more respect! You’re the change we want to see. I wish those who take poor people’s money for a part-time job will grow a conscience! When I see them pretending to be honourable it makes me sick!,” he posted on his Facebook timeline.

He indicated that he felt uncomfortable with the money paid for part-time work which he received monthly salaries and other benefits.

“I believe it was paid to everybody who served on the Council of State. However, I thought that extra payment was inappropriate for a short, effectively part-time work, for which I received a monthly salary and was entitled to other privileges. So, I was very uncomfortable with it,” part of the statement read.

Togbe Afede mentioned that the refund was hinged on his “general abhorrence of the payment of huge Ex Gratia and other outrageous benefits to people who have by their own volition offered to serve our poor country.”

Tags ARE CHANGE see THE to WANT WE you

Previous Ivorian footballer dies from falling off a moving train in India
Next I lost $120,000 when I invested in Wutah – Guru