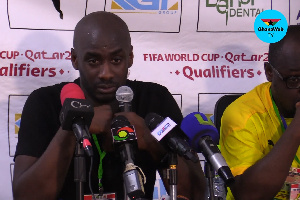 Black Stars coach, Otto, has admitted Japan was faster than Ghana in their match that was played in the Kirin Cup.

According to the coach, his team fought hard to get back into the game but the Japanese were very resilient and fast on the ball.

Speaking after the game, Otto Addo said, “at the end of the first half, we also made a chance and scored a tie goal. However, it was unfortunate they got a second goal just before the end. Even in the second half, we were fighting solid. However, after that, a third goal was scored and the momentum was lost. Japan was a very fast team with a good combination.”

The Black Stars coach noted that his team’s failure to press harder and close in on their opponents is what resulted in their loss to Japan in the game.

“If we press and steal the ball, we can score. I thought. I think I was able to prove it after 20 minutes in the first half. Still, we couldn’t cover the backspace. We had a pocket stabbed. The final phase of one-on-one. I couldn’t stop the other party,” he said.

Otto Addo indicated that Japan was just the better side in the game and deserved the win on the day.

“The whole team was good in Japan. It’s hard to name one person. It was a very good team. Crosses were sent to Japan one after another in the box and I couldn’t stop the last part,” the coach added.

Goals from Yamane Mitoma, Kubo and Maeda sealed the comfortable 4-1 victory for the Japanese as they head into the final of the tournament to face Tunisia.

Jordan Ayew scored a superb goal to end his goal drought in the national team in the match.

Previous Ghanaians are lucky to have Akufo-Addo in this ‘difficult’ time – Osafo-Maafo
Next Injunction hits Nana Otuo Siriboe, others over enstoolment of New Juaben Omanhene