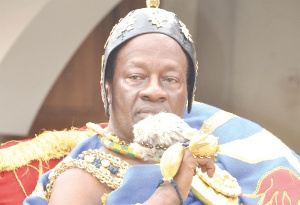 A petition and an interlocutory injunction application have been filed against moves to install a new Chief for the New Juaben Traditional Area in the Eastern Region.

The petitioners include a medical doctor by name Dr. Kusi Agyemang, Ama Akyaa, Awo Asabea, Afia Achia and Abena Amosenkye who argue that Nana Otuo Siriboe II (Omanhene of Juaben Traditional Area) and his kingmakers who purportedly nominated and outdoored Mr. John Gyamfi to be enstooled Omanhene of New Juaben lacked the requisite capacity to solely do so.

According them, Nana Ama Duwaa’s Gate and Nana Akua Sapomaa-Boatemaa’s Gate constitute the Royal family of the Oyoko clan of Old and New-Juaben Traditional areas from which valid candidates for nomination, selection and election can be chosen for enstoolment as the Omanhene of New Juaben.

The petitioners noted further that NANA OTUO SIRIBOE II together with NANA AKOSUA AKYAMAA III failed and or neglected to consult the Duwaa Lineage before nominating John Gyamfi as a candidate for election, selection and enstoolment for the position of the Omanhene of New-Juaben.

“It is the contention of the Petitioners that the 1st and 2nd Respondents failed and or neglected to consult with the Nana Ama Duwaa’s Gate before nominating the 3rd Respondent as the candidate for the vacant position of Omanhene of New-Juaben; and that as a matter of fact, the 1st and 2nd Respondents blatantly disregarded the Nana Ama Duwaa’s Gate in the alleged nomination of a valid candidate to fill the vacant position. Thus, the process by which the 3rd Respondent was nominated is not consistent and or in accordance with Akan Customary Law, practice and usages, and therefore the alleged nomination is invalid,” the petition said.

The petition which was filed on Monday, June 6, 2022, at the Eastern Regional House of Chiefs demanded a perpetual injunction on any process relating to or leading to the installation of John Gyamfi as the new Paramount Chief of New Juaben Traditional Area.