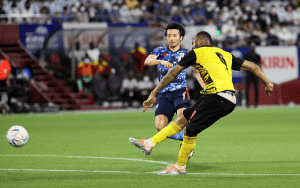 Jordan was on target in Ghana’s 4-1 humbling by Japan in the ongoing Kirin Cup. The goal was his 19th strike for the Black Stars, putting him level with his father who scored 19 in 73 matches.

Jordan hit his in 80th appearance and is set to surpass his father in the subsequent games.

In the game, the Crystal Palace forward restored parity for the Black Stars in the 44th minute with a sumptuous strike from just outside the box.

However, his equaliser did not last long as Japan restored their lead in additional time of the first half.

The Blue Samarai added another two goals in the second half to secure their big win and progress to the finals of the four nations tournament.

Jordan Ayew’s goal marks an end to his 12 months, 13 days drought for the national team.

The striker’s last goal for the Black Stars was against São Tomé and Príncipe at Accra Sports Stadium on 28th March 2021.

Ghana following the defeat will play against Chile in a battle for third place on June 14, 2022.