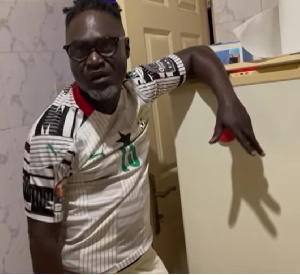 Controversial sports journalist, Patrick Osei Agyemang better known as Countryman Songo has disclosed that coach Otto Addo is not the right man to lead the Black Stars to the World Cup in Qatar.

Countryman Songo’s comments come after Ghana was hammered 4-1 by Japan in the Kirin Cup tournament played on Friday, June 10, 2022.

According to the sports broadcaster, both coach Otto Addo and Black Stars have nothing good to offer the country going into the 2022 FIFA World Cup.

The defeat was coach Otto Addo’s first in charge of the Black Stars after taking over from Milovan Rajevac.

Goals from Yamane Mitoma, Kubo and Maeda sealed the comfortable victory for the Japanese as they head into the final of the tournament against Tunisia.

Jordan Ayew scored a superb goal to end his goal drought in the national team in the match.

Tags ADDO CUP FIT FOR IS not otto THE WORLD