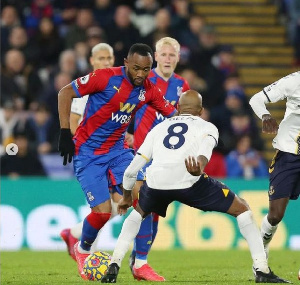 Palace are 12th on the table with 19 points

Jordan Ayew has not scored in 44 games

Black Stars striker, Jordan Ayew has reacted happily to Crystal Palace’s home win against Everton at the Selhurst Park over the weekend.

Despite his inability to score a goal, Jordan Ayew assisted Conor Gallagher’s first goal for the home side.

The Ghanaian striker last the entire duration of the contest in the English Premier League game on Sunday, December 12, 2021.

Reacting to the game, Jordan Ayew said he was happy to gain a convincing win over an opponent like Everton.

“An important, convincing win! Great performance & just what we needed before this important period of games Congrats to @conorgallagher92 & James for the goals! Let’s go,” Jordan Ayew wrote on his Instagram page.

Crystal Palace now occupies the 12th position on the league table following their 3-1 win over Everton on matchday 16.

Source: www.ghanaweb.com
Related Topics:jordan
Up Next