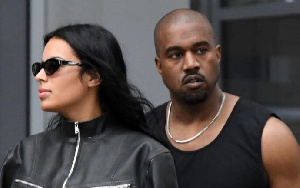 Kanye West’s latest muse, Chaney Jones, has disclosed that she is Ghanaian.

This was after she took to Instagram on March 13, 2022, to reveal some unknown information about herself.

In a bid to clear the air on claims that she has done a face surgery, the 24-year-student listed some ‘5 facts about herself.

Among the facts she gave insight on her ethnic background, writing, ‘I am European, French, German, West African, Nigerian, and Ghanaian.’

The entrepreneur said she’s a student, posting that she’s ‘currently getting my master’s in counseling’ and adding that she maintains a 4.0 GPA.

Jones doubled down on having no plastic surgery on her face: ‘No I have never had surgery on my face, I was born like this.’

She said she’s a Virgo and included her birth date as August 28th.

Since she began dating Kanye, Chaney has drawn comparisons to the SKIMS founder, often being photographed in noticeably similar fashion looks.

Chaney and Ye have been spending time together since the rapper’s split from Julia Fox just weeks ago.

It 44-year-old artist’s new girlfriend is said to possess similar looks as his ex-wife Kim Kardashian, 41.