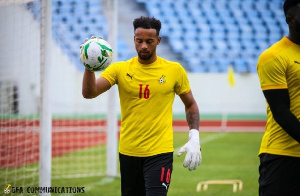 Swindon Town goalkeeper Jojo Wollacott has left the Black Stars camp due to illness ahead of the Kirin Cup in Japan.

Wollacott, according to multiple reports, has returned to London for treatment.

Wollacott reportedly did not play on Sunday because he was ill, and his condition has not improved, prompting the decision to let him leave camp.

This means that the 25-year-old will be unavailable for the four-nation tournament, which begins on June 10.

Black Stars will face Japan on Friday, with the winner facing the winner of Tunisia vs. Chile in the final on June 14.

Meanwhile, on the same day, the losers will compete for the bronze medal.

Wollacott has been Ghana’s first-choice goalkeeper since late 2021, replacing Orlando Pirates man Richard Ofori who is struggling with injuries.