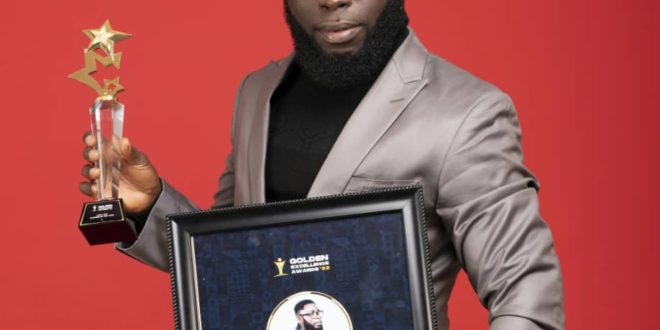 The Golden Excellence Awards, which is Nkay Events Management’s initiative is a prestigious and credible award scheme that is aimed at honouring individuals and the youth who are making significant contributions to the country’s development goals in their disciplines.

The corporate blogger has several years of experience reporting on issues such as health, Sustainable Development Goals (SDGs), human interest stories, environment and politics, entertainment, and security, among others.

As an online journalist, Isaac Kofi Dzokpo, the all-around writer, has made significant contributions to the media landscape over the years.

The Citation of Honour reads Congratulations Hon Ike… “In recognition of your distinguished service in your field, your dedication, enthusiasm, and optimism towards work for excellence is worthy to applaud.”

Reacting to the award, Kofi Dzokpo the multiple award-winning Blogger and Comic Actor seized the opportunity to express his profound gratitude to all and sundry who contributed in a diverse way to ensure his victory.

He claimed that the honor would motivate him to put in even more effort to advance the nation’s development.

Last year, Hon Ike won the blogger and comedian of the year at the Style ICON & Arts Awards. The Universal Peace Federation also appointed the Ghanaian journalist as a peace ambassador (UPF).

Additionally, he has made appearances in both local and foreign films, such as “Beasts of No Nation,” which also stars Abraham Attah and other actors and actresses from around the world.