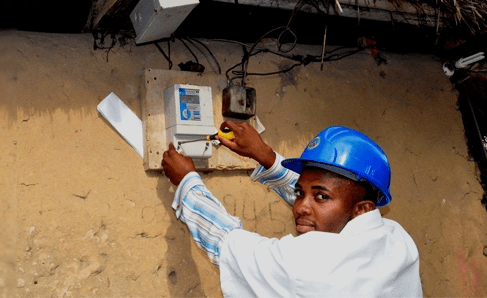 The Electricity Company of Ghana, ECG, has restored power to Yilo and Lower Manya Krobo Municipalities in the Eastern region.

The power was restored at about 4:25 pm Sunday, December 12, 2021 exactly seven(7) days after the entire area was plunged into darkness.

The restoration of power was greeted with spontaneous wild jubilation by residents.

Yilo and Lower Manya Krobo Municipalities were plunged into the darkness since Monday, December 6, 2021, following the decision by ECG to shut down the feeders to the Bulk Supply Point (BSP) which supplies power to the two Municipalities.

ECG explains the decision became necessary due to illegal connections by unscrupulous people on their transformers increasing the load.

A statement issued by ECG stated that “in view of the ongoing interference in our network as a result of the scaling down of our operations in the Krobo area which was necessitated by the threat to our staff, ECG has decided to shut down the feeders at the Bulk Supply Point (BSP) directly feeding the Communities in order to protect our network, lives, and properties of innocent customers and the general public within the lower Manya and Yilo Krobo communities ”

The feeders were switched off a few hours after the power distributor closed down its district office in Somanya over safety concerns.

The week-long power outage crippled the local economy as businesses including cold stores, welding shops were struggling to operate.

The Member of Parliament for Yilo Krobo Albert Nyarkotey facilitated stakeholders meeting between ECG, traditional authorities in Yilo and Manya krobo area as well as the youth Groups -Kloma Gbi and Kloma Hengme which some far-reaching resolutions were arrived at in the interests of both the Krobo Customers and the ECG.

The condition precedents and subsequent include the fact that there shall be a resolution from all Assembly members, in the two Municipalities together with the two Presiding Members to the effect that, ECG workers shall have access to ECG installations and meters in the communities as well as the homes of customers without obstruction from anyone. (This is currently being done by the two assemblies)

That, no individual or group shall attack any ECG installations be it transformers or meters within the affected areas.

That, a Technical team from ECG together with a team of both MP for Yilo and Manya would visit the affected sites of damaged ECG installations to assess the extent of the damage.

ECG shall immediately begin repair works on all broken/damaged installations in a bid to restore power to the affected Krobo Municipalities of Yilo and Manya.

Meanwhile, a group calling itself Coalition of Krobo youth has promised to deploy 1000 youth from both Yilo and Lower Manya Krobo Municipalities to provide 24-hour security to ECG workers so the company could return operations to the area.

Addressing the media on Thursday in Somanya, the group said the intervention has become necessary because the security agencies – the Police and the National Intelligence Burea (NIB) – have failed to arrest the miscreants of United Krobo Foundation threatening ECG officials and stoking conflict between the residents and the power distributor.

Speaking during a media briefing by the Coalition, the convener Frederick Narh Okley appealed to ECG to restore power to the two Municipalities whiles engagement continue .

The group condemned the ultimatum issued by United Krobo Foundation for ECG to vacate the krobo area. They also described as untrue statement that Krobos do not want to pay bills and do not want Prepaid meters

The Inspector-General of Police(IGP) Dr George Akuffo Dampare on Friday, December 10, 2021, visited the Krobo area following Intelligence that some residents were planning to go on a rampage in protest against the deliberate power cut to the Municipalities.

The IGP warned trouble makers in the area to abort such plots and use due processes to address their grievances to avert falling foul of the law.

The IGP said the Police administration will not entertain lawlessness hence admonished residents to the responsible and law-abiding.

The IGP assured power will be restored soon.