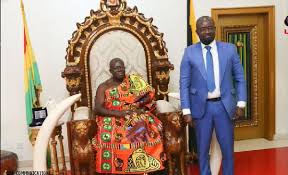 Ghanaian sports journalist, Saddick Adams has been explaining to the Asantehene, Otumfuo Osei Tutu II, why player exodus would be very difficult to end.

The Asantehene on Thursday, December 16, 2021, charged the Ghana Football Association’s President Kurt Okraku to bring an end to the numerous player exodus in the local league.

“I often hear the young players say, ‘we are going abroad, but when they get there they struggle. If they relax and get nurtured, they will excel. You have to bring an end to the player exodus. The counselling unit of the GFA has to engage these young players to stay in Ghana for a while before leaving for greener pastures,” he said.

Otumfuo Osei Tutu II made this known when the GFA paid him a visit at the Menhyia palace in Kumasi.

However, reacting to Otumfuo’s comment, Sports Obama, as known widely, indicated that the GFA boss is involved in the transfer of players outside the country.

“Nana, the man you are advising is the GFA president. Kurt Okraku has a football team called Dreams FC. He recently exported one of his budding young players to a club in Tunisia, it’s not abroad. He has a number of good players but this Christmas he will sell them,” Sports Obama said on his show on Angel FM.

He further enumerated that, “Nana, your own team, Asante Kotoko, they brought in Kwame Bonsu. They sold him after one year. They later went for a player at Nkronasa, if he had stayed, Kotoko would have won the league last season but they also sacrificed him.”

The Sports Journalist also urged the Asantehene to do a thorough check on Asante Kotoko who have also developed an interest in selling their top players to other African clubs.