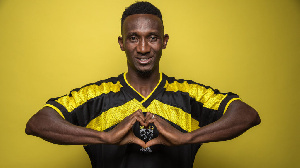 Ghanaian defender Harrison Afful has departed Columbus Crew after spending seven seasons at the club as a free agent and joined expansion side Charlotte FC.

Afful, 35, has signed a contract with expansion club Charlotte FC for its inaugural 2022 season and a club option for 2023, Charlotte announced on Friday.

The Crew opted not to re-sign Afful when his contract expired after the 2021 season, leaving him open to being picked up in free agency.

Joining the Crew in the middle of their 2015 season that ended with an MLS Cup runner-up finish, Afful became a fixture in the starting lineup at right back and was regarded as one of the best right backs in Major League Soccer for much of his career in Columbus.

Afful started in 155 of his 164 MLS regular-season appearances and all 17 of his playoff appearances. Two of his most iconic moments in a Crew jersey came in the postseason. In the 2017 Eastern Conference semifinals against New York City FC, Afful dribbled around multiple defenders for a sensational goal. Another was on a perfect delivery to Lucas Zelarayan for the opening goal of the Crew’s 2020 MLS Cup victory.

During the 2021 season, it became clear that Afful didn’t have the same ability as he did before to join the attack or track back quickly defensively. The Crew signed French right back Steven Moreira in the middle of the season to be Afful’s replacement.

Afful will return to Columbus on June 18 when the Crew take on Charlotte at Lower.com Field.