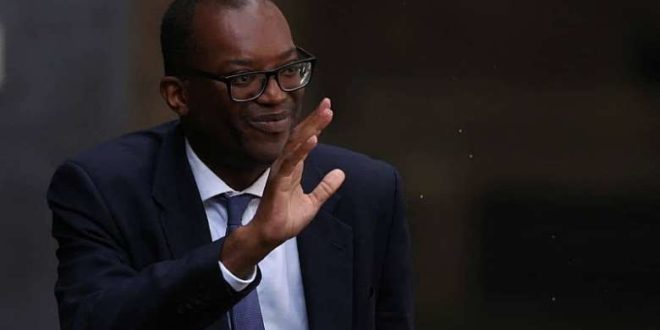 The Rt. Hon. Kwasi Kwarteng, MP has been appointed the first black Finance Minister in Britain, otherwise known as UK Chancellor of the Exchequer.

The new role of the British-born Ghanaian was announced today, September 6, 2022, by the office of Britain’s new Prime Minister, Liz Truss.

Until this fresh appointment, Rt. Hon. Kwarteng was the Secretary of State at the Department of Business, Energy and Industrial Strategy, having served in his previous role as Minister of State of the same Department.

Kwasi was Parliamentary Under Secretary of State in the Department for Exiting the European Union from 16 November 2018 to 24 July 2019.

Kwasi read classics and history at Trinity College, Cambridge, and then attended Harvard University on a Kennedy Scholarship.

He earned a PhD in economic history from the University of Cambridge in 2000.

Before becoming a Member of Parliament, Kwasi worked as an analyst in financial services.

In October 2016 Kwasi joined the Public Accounts Committee, where he was a member until May 2017.

Kwasi Kwarteng was at HM Treasury after his new appointment.

He met with senior figures in the department where they discussed urgent energy bills support, with an announcement set to come this week.

Chancellor of the Exchequer

The Chancellor of the Exchequer is the government’s chief financial minister and as such is responsible for raising revenue through taxation or borrowing and for controlling public spending. He has overall responsibility for the work of the Treasury.

The Chancellor’s responsibilities cover: Fiscal policy (including the presenting of the annual Budget) monetary policy, setting inflation targets, ministerial arrangements (in his role as Second Lord of the Treasury), and overall responsibility for the Treasury’s response to COVID-19.

Additional details for this report were picked from https://www.gov.uk/