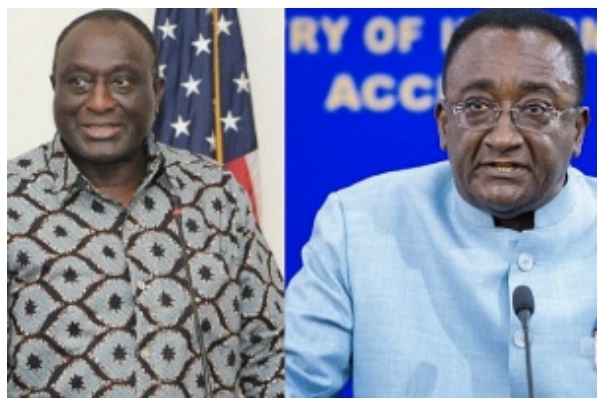 It’s a big question with a high probability – Will these two ministers under President Nana Addo Dankwa Akufo-Addo give up one opportunity to chase an even bigger one?

The race for the New Patriotic Party (NPP) Flagbearership is becoming increasingly keen with some aspirants making bare their intentions and outlining their strategies.

As part of the party’s laid down provisions, the NPP has noted in Article 12 of its constitution, that “the election of the Party’s Presidential Candidate shall be held not later than twenty-four (24) months from the date of the national election.”

In view of this, the flagbearership election will be held by the NPP in 2023 but ahead of this, the President has reportedly announced that all persons, serving in his government, interested in vying for the position, should focus on their ministerial duties or resign from their various ministerial positions.

In December 2021, Asaase Radio reported that President Akufo-Addo told some aspirants during a cabinet meeting to “focus on the job” they have been tasked with or quit to pursue their presidential dreams.

The president is said to have told these aspirants that their ambition could get in the way of their ministerial duties.

In a latest development, Citi FM’s presidential correspondent reportedly said in an interview on the ‘Big Issue’ on Saturday, January 15, 2022 that the President has given ministers who are interested in pursuing presidential ambitions a deadline.

“The president has given them [flagbearer hopefuls] up to June this year to either resign if they want to contest in the NPP primaries or stay in and not contest at all.

“I am told that he gave that warning at a cabinet meeting that if you have plans of succeeding him [Akufo-Addo], then latest by June [2022], you should be out of government,” Sammi Wiafe is quoted to have said.

If this happens, it will mean two of the five names that have emerged so far will have to step down from their ministerial positions to be able to vie for the flagbearership position.

The two are Dr. Afriyie Akoto who is Agric Minister, and the Trades Minister, Alan Kyerematen.

These two candidates were mentioned by the president, Nana Addo Dankwa Akufo-Addo, during a tour in the Ashanti Region in October 2021, as having expressed interest in becoming flagbearer of the NPP.

Prior to this, Dr. Afriyie Akoto has been in the media, confirming his interest in chasing the position. In an interview on Joynews last year, the Minister said it will be an honour if delegates of his party select him to run as President in election 2024.

“Why shouldn’t I be? I am a member of this party and a very senior member, so why shouldn’t I? The destiny of this party should be of great concern to me and for all of us as party members. If I was going to say I was not interested in running for President, I would have said so,” he said.

A few days ago, Alan Kyerematen had his turn, advocating for party members to rally behind him and give him a chance to lead the party.

While addressing a gathering of the party’s faithful at an undisclosed location on Tuesday, January 11, 2022, he recalled how he paved way for President Akufo-Addo to take the flagbearership position, to avoid a revote in 2007.

He believed now was his time and others have to sacrifice in like manner for him.

“You remember when we went to Legon to elect a leader, you remember there were only two people out of the 17, who and who? Alan and Nana Addo, you remember?

“I had over 32% and Nana had over 40%, but because of the unity of the party, I decided that I will support Nana so we all rallied behind him. It is time for other people to sacrifice and give Alan the chance to lead this party,” he said.

With 5 months to the deadline given by the President for Ministers interested in becoming presidential candidates for the party, the question is will these two give up their position?

This will be a repeat of the situation as it happened under John Agyekum Kufour in 2007 when some ministers had to resign from their cabinet portfolios to chase after their presidential dreams.

Another question is, if these ministers resign, which persons will be their substitutes?

Perhaps something Ghanaians should look forward to, or expect soon.

Previous Kotwi: Man who knifed ‘friend’ to death lynched by mob
Next We don’t have a player like Asamoah Gyan – Milovan Rajevac admits he misses top striker