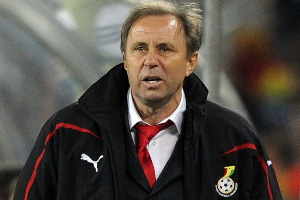 During his first stint with the Black Stars where the Serbian tactician succeeded, he had some of Ghana’s best players including Stephen Appiah, John Mensah, Michael Essien, and Asamoah Gyan.

Although the Black Stars equally have some good players this year at the 2021 TotalEnergies Africa Cup Of Nations (AFCON) tournament, it has been clear the quality is not at the highest.

Speaking at a press conference this afternoon ahead of Ghana’s final Group C match against Comoros, Milovan Rajevac has admitted that his current team is lacking a top striker.

“We don’t have the same team like 2010. Not enough time for preparations. We don’t have a player like Asamoah Gyan,” the coach said.

Milovan Rajevac will be in the dugout on Tuesday, January 18, 2022, when Ghana takes on Comoros.

The Black Stars must win convincingly to stand any chance of progressing to the knockout stage of the AFCON.