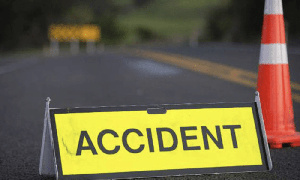 Man crushed to death at Kimotey

One person has died in a crash at Kimotey, a community near Chamba in the Nanumba North Municipality of the Northern Region.

According to a Citinewsroom.com report, another person is in critical condition following the crash which occurred on Sunday, February 13, 2022.

The incident is said to have involved a motorbike and a cargo truck.

The victims who were riding on the motorbike are said to have attempted to overtake the cargo truck but fell under the truck due to poor visibility on the dusty road.

The deceased victim is said to have died on the spot while the second victim was taken to a medical facility for treatment.

Previous Teacher arrested for allegedly flogging 19-month-old child to death
Next VIDEO: Yaa Jackson in a lovey-dovey moment with boyfriend as she unveils him on Val’s Day