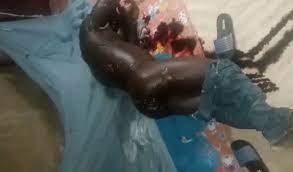 The lifeless body of a young man has been discovered in an uncompleted building at Buokrom – Quarry, a suburb of Kumasi in the Ashanti Region.

The body of the deceased who was only identified as Kwabena Atuahene was seen in the uncompleted building decaying days after his demise.

The incident has sparked  fear among residents in the area with many suspecting foul play in the death of the young man.

Eyewitness in an interview with OTEC News’ Kwame Agyenim Boateng said incident came to light on  Monday July 26, at about 4:00 p-m due to the strong odour emanating from the decaying body.

“We immediately called the police to assist us in this situation because most of us were in fear “. A resident said.

The body of the the deceased according to residents have been conveyed to the hospital by police in the area.