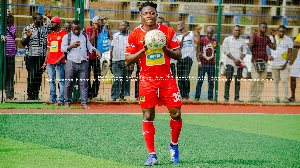 Medeama SC midfielder Justice Blay is now a Kotoko player after penning a two year deal with the reds after leaving the mauve and yellows as a free agent.

He played his last game for the club in their 1-0 win over AshantiGold on Monday and will be registered by Kotoko when the second transfer window of the Ghana Premier League opens.

The player was close to joining Asante Kotoko at the start of last season but the move fell through due to Medeama’s astronomical valuation of their midfielder.

Justice Blay missed half of the 2020/2021 season through an injury but is now fit and has been playing for the mauve and yellows.

His contract with the Tarkwa based club expired last week after the player rebuffed all attempts by Medeama to extend his contract as the player had his sights on joining Asante Kotoko were he had a loan spell in the 2019/2020 season.

Blay has played three matches for Medeama this season scoring just a goal in the process.