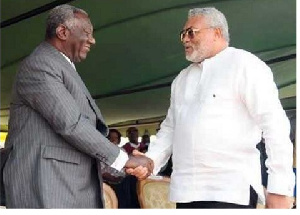 JA Kufuor was a member of the PNDC

He was the Secretary for Local Government

In response to his letter on August 18, 1982, which was shared by Abdul Malik Kweku Baako on his Facebook timeline, JJ Rawlings stated that he found it difficult to grant JA Kufuor’s request.

“Although I find it hard to grant the permission you seek, I realize that your decision to resign was influenced by your respect for principles dear to your heart. Consequently, I very much regret to have to accept it.

“I wish to express the gratitude and appreciation of the members of the PNDC as well as my own to you for the dedicated services and sacrifices that you have given for our country during the period that you have been with us.

“Let me assure you that our doors are open to you at any time. We shall appreciate your views on the affairs of our country especially when those views differ from ours and your criticism of our performance.

“I wish you every success for the future,” Rawlings letter to Kufuor concluded.

Kufuor joined the PNDC as the Secretary for Local Government because he believed that JJ Rawlings was forming a national government.

Narrating his story to Asaase Radio on Sunday, September 13, 2020, Kufuor explained that after the December 31, 1981 coup by Jerry John Rawlings, he was at the time an MP and all MPs were asked to report to the nearest Police Station.

He [Kufuor] after reporting to the Police Station found himself at the Ussher Fort Prisons for the second time; his first was after the 1972 coup that overthrew President Edward Akufo-Addo/Prime Minister Busia government.

After being there for some time, it was announced on the radio that 36 MPs were being released. The 36 MPs that were released included 34 opposition MPs and he was “included”.

He said: “So I came out of Ussher Fort Prison. Then we were taken to Victor Owusu’s house the same day by AK Deku [a police officer who] was part of the MPs released.”

At Victor Owusu’s house, Kufuor recounted the Party elders telling them that the coup makers would be sending one Brigadier (Rtd.) Joseph Nunoo-Mensah to tell them that they [coup makers] wanted to work with outsiders to form a national government.

“So, the elders said [that] should any of us be invited by the new government, we shouldn’t say no because it is the national government and for the sake of Ghana. Then the very next morning after my release, Kwamena Ahwoi, came to my house saying Rawlings wanted to see me at Gonda Barracks,” he said.

He continued: “When we went there, with him [Rawlings] and about 10 people [Rawlings loyalists], they said that I should do local government for them. So, I said [that] ok because I have been city manager of Kumasi before so that shouldn’t be a problem. That’s how I got in there.

“Six months with them, I didn’t see the national government the elders of the party have been let to believe it would happen […] so I told Victor Owusu and the elders, this is far from what we were led to believe would happen so I couldn’t be part of it and I left. When I put in my resignation, he [Rawlings] wrote a nice letter and signed stating clearly that they appreciate the difference in outlook [between me and them], wishing me well. I went about minding my own business.”

Find below Rawlings’ letter to Kufuor 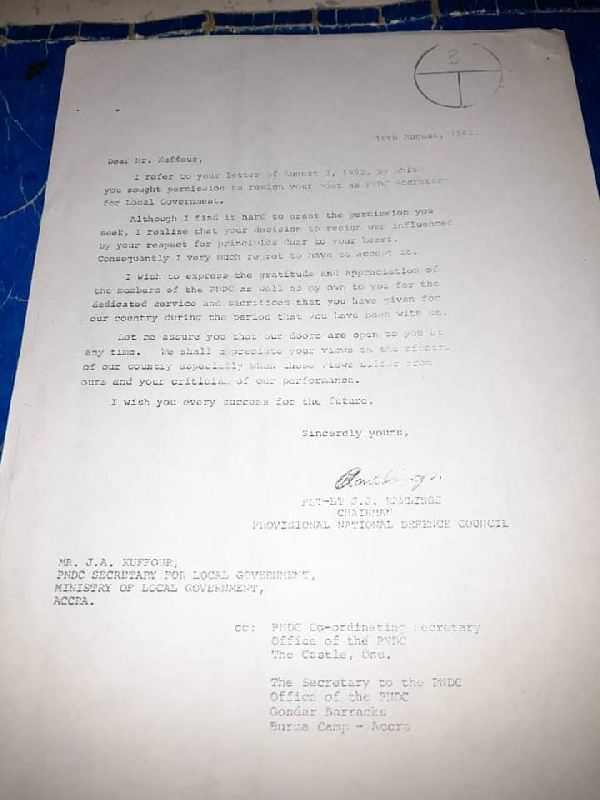