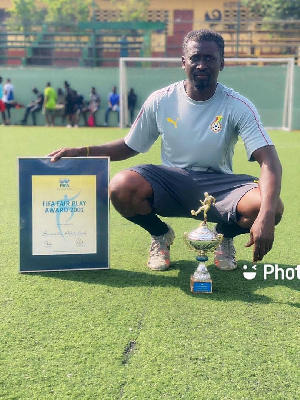 In 2001, Accra Hearts of Oak star player, Charles Taylor nearly lost his life when he attempted a bicycle-kick,fell badly and collapsed during a football match.

The incident occurred during a match in the FA Cup semi-final game between Accra Hearts of Oak and Dawu Youngsters in November, 2001.

It was a tough match that Hearts of Oak were looking forward to win and progressed to the final of the competition. Hearts of Oak got an opportunity to score and a cross was swung into the box and Charles Taylor saw a chance to exhibit his skillful attributes by attempting a volley kick.

However, luck eluded the Hearts of Oak poster boy, Charles Taylor who unfortunately fell heavily to the ground and collapsed on the pitch afterwards.

The stadium was silent for a moment when Taylor failed to get up to continue the game. Taylor had seized breathing and was on the verge of losing his life.

It took, the selfless act of the Dawu Youngsters goalkeeper Sumaila Abdallah to save Charles Taylor’s life with what has been termed as ‘the kiss of life’.

Abdallah who realized the danger his opponent in the match was battling, quickly rushed to Taylor’s aid and revived the striker with a mouth-to-mouth resuscitation in spite of the health risks at stake to himself before the medics arrived.

Whiles Abdallah was reviving Taylor with a mouth-to-mouth resuscitation, it took time for medical team took time to get to the end of the pitch where Taylor was lying.

But in the end, Abdallah managed to revive Taylor with what has been termed ‘the kiss of life’ before he was attended to by the medical team.

Although, there was no video to capture what happened, Ibrahim Sannie Daara was able to paint a mental picture to the World Football Authorities in his write up and urged them to award him his magnanimity.

Abdallah subsequently earned nomination for the 2001 FIFA Fair play award where competed with the likes of Luis Figo, Raul Gonzalez and David Beckham for the award.

The 18-year-old goalkeeper travelled with Ghana legend Abedi Pele and George Weah [the first African to win the FIFA Player of the Year award] for the event which was held on 21 December 2001.

Abdallah won the award for his selfless intervention and his award was later handed to him by the maestro, Abedi Pele.