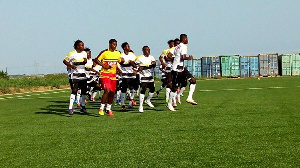 The Black Stars of Ghana will pitch camp in Qatar ahead of the 2021 Africa Cup of Nations, some sports new outlets reports.

Report from multiple portals indicate Qatar has been agreed on as the destination of the pre-tournament preparations of the Black Stars.

The report furthers that head coach Milovan Rajevac will in the coming weeks announce his team for the tournament.

As part of the preparations, the Black Stars will play three friendly matches with their first opponent being reigning AFCON champions Algeria.

Milovan Rajevac will gauge the preparedness of his team against the team ranked number one on the continent.

Ghana will be chasing a fifth AFCON at this year’s edition which will be held in Cameroon.

Ghana’s fourth and last trophy came in 1982 when it was held in Muhammar Gadafi’s Libya.

Milovan Rajevac has been tasked with winning the AFCON and also leading Ghana to the 2022 World Cup.

The Black Stars have been paired in Group C with Morocco, Gabon and Comoros Island.

The 2021 edition of the biennial competition has been scheduled for January 9 to February 6, 2022.

No Ghanaian in BBC African Sports Personality of the Year award