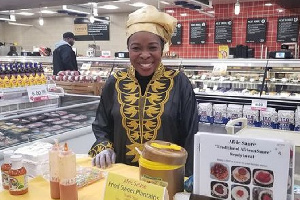 Florence Karp is a food entrepreneur based in the United States. She markets and sells her own line of traditional Nigerian sauces to Minnesota grocers and stores.

She worked as a teacher, a seamstress, and a caterer in Nigeria before migrating to the United States in search of better opportunities in 1997. She first settled in Philadelphia but soon faced harsh economic realities which made her rethink life in the U.S., according to Sahan Journal.

At the invitation of her friends, she went to St. Paul, where she obtained her mortgage broker’s license after taking the necessary courses and completing a two-year apprenticeship She was having a successful career as a mortgage broker before the housing bubble crashed in 2007.

After the collapse of the housing market, she became a life coach and motivational speaker. She even published a self-help book titled “My Choices: Start Taking Action and Create the Life You Want.”

That was not all for Karp. She also pivoted towards the food industry. This came after running into an old mentor at a business convention. Her friend encouraged her to go into the food business. Initially, she was skeptical about the idea, fearing legal challenges.

But growing up in Lagos, Nigeria, she had volunteered in her mother’s restaurant. And while working as a mortgage broker, she sometimes prepared African meals for her co-workers. So she eventually incorporated Chef Flo-K foods in 2016 and released her product, Afric Sauce. The sauce contains tomatoes, onions, red bell peppers, water, tomato paste, canola oil, natural flavor, sea salt, cayenne pepper, curry powder and thyme, according to her website. “Afric Sauce is more than just a condiment – based on a traditional Nigerian stew base, it works great as a base or to pair with a wide array of vegetables, proteins, and grains, and can be eaten hot or cold,” the website ads.

Her first Afric Sauce however needed refrigeration and that became a problem for her when she started the business. “I made little samples and sold it at farmers markets. People loved it,” Karp told Sahan Journal. “But when I went to the stores, they said, ‘We have no place to refrigerate it. You will have to bring your own refrigerator.’ I said I can’t afford that.”

Using her personal savings and grants, Karp reformulated her recipe and hired an outside company to manufacture a “more shelf-stable product.” That process took almost three years, and after, she launched the business.

She now sells her hot sauce online and at several retail outlets like Kowalskis, Hy-Vee, North Market in Minneapolis, and Seasoned Specialty Food Market in St. Paul, according to Sahan Journal.

Karp said that she usually does the delivery herself even though she is the CEO. Her goal now is to bring people together to better understand African culture and cuisine.

“I cannot take you to Africa but at least I can bring the taste of Africa to your kitchen. Afric Sauce gives an emotional connection to African food. It’s very convenient and it’s a big step up from a TV dinner. But you can use my sauce in sloppy joes.”