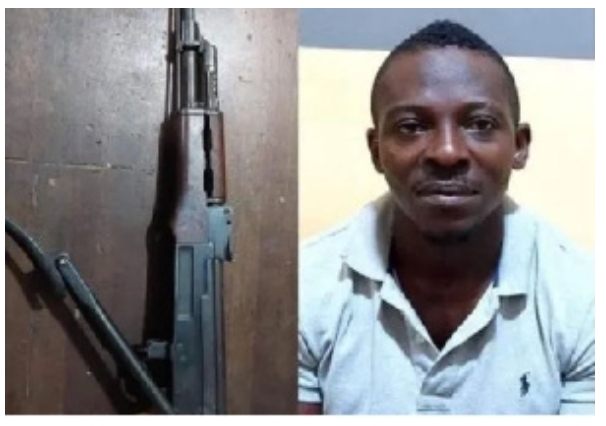 The woes of an embattled soldier who was captured in a viral video discharging a firearm at A & C Shopping Mall at East Legon in Accra are deepening following fresh charges against him.

Flight Sergeant Nicholas Owusu Frimpong who was seen welcoming the Year 2022 amidst the discharge of his AK 47 assault rifle, is currently in the military Guard room as investigations continue.

Police indicate that discharging a firearm in public without lawful and necessary occasion under Section 209 of the Criminal Offences Act 1960 (Act 29) is an offence.

The suspect in the wake of this faces an additional charge of firing a weapon within the range of a flying zone according to an official of the Ghana Armed Forces who confided in MyNewsGh.com.

Our source indicates that Flight Sergeant Nicholas Owusu Frimpong may be expelled if found guilty after prosecution indicating a demotion is the lighter punishment for the offence.

It would be recalled that Flt. Sergeant Nicholas Owusu Frimpong attached to the presidency was seen in a video firing gunshot at the A&C Mall on the eve of the New Year.

The Police after interrogating the video placed a bounty of GHC 5,000 on whoever could with information on his whereabouts so he would be arrested.

Previous Here are all the holidays for Ghana in 2022
Next 20 armed policemen storm Accra FM, arrest Drivetime host over AFCON coverage