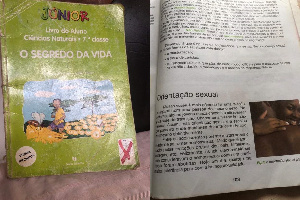 Authorities in Mozambique have recalled all science textbooks for grade seven pupils.

The book titled ‘The Secret of Life,’ which is used to teach 12-year-olds has been in circulation since 2004 but is being recalled now because of a controversial page.

“We talked to the publisher to remove that page,” top official of the Ministry is quoted to have said.

The BBC reporter in the country reported that the education ministry said the topics are generating controversy in society and will longer be taught.

The book will be replaced next year but the education ministry has urged schools “not to address the issues.”

Previous WATCH: Afia Schwarzenegger ushered into 40 with fireworks and champagne bath
Next 19-month-old pupil ‘flogged to death’ by teacher