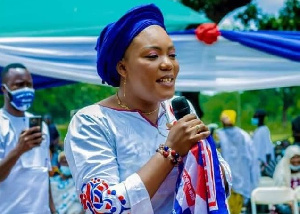 The Second Northern Regional Vice Chairperson of the New Patriotic Party(NPP), Madam Felicia Tetteh has recounted several times she has been physically attacked in the presence of colleagues by another executive.

She indicates that the attacks have become habitual yet the Regional Chairman of the NPP Mohammed Baantima Samba appears indifferent to these numerous assaults.

The NPP Executive who feels her life is under serious threat has vowed never to attend any Regional Executive Committee meetings since she is uncertain of her security in the hands of her colleagues.

Narrating her harrowing experience on Tamale-Based radio Tamale, the 2020 NPP Parliamentary Candidate for Sagnarigu accused her of colleagues of embarking on the path of tribalism.

“I no longer attend Regional meetings unless the National Executives are coming and I am guaranteed I will be safe when I attend such meetings. I have very good reasons for absenting myself from meetings known to both the Regional and National Executives”, she revealed.

According to her, she has been consistently physically assaulted each time she shows up for such meetings and has since notified the national executives of the party.

“Assault is the number one conduct for which I no longer attend Regional meetings. If there is Regional Executive among us whose habit is to assault others that person ought to be suspended. I have been assaulted multiple times and I want them if indeed they are devout Muslims to speak the truth. The matter reached its crescendo during the confirmation of the Savelugu MCE. As a result, I have vowed to boycott all NPP events until I am assured of my safety during visits by National Executives”, she insisted.