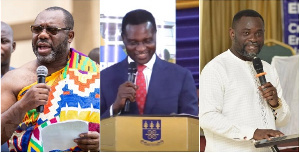 At least ten sitting New Patriotic Party (NPP) Members of Parliament (MPs) are expected to lose in the party’s upcoming primaries to choose its parliamentary candidates for the 2024 election.

This is according to the July 2022 Constituency Report compiled by Global Info Analytics.

The report indicated that some of the casualties might include Bosomtwe MP and Minister for Education, Yaw Osei Adutwum; Manhyia South MP, Minister for Energy, Dr. Matthew Opoku Prempeh, Ejisu MP and deputy Minister of Finance, John Kumah Ampontuah.

It suggested that Opoku Prempeh has a problem with many of the party’s delegates in his constituency and some are prepared ‘to hang him’.

“The MP is in real danger and could struggle to win his primaries as 57% of NPP voters are unlikely to vote for him…He appears to have a problem in the constituency,” parts of the report said.

For the education minister, the report concluded that more than 50 percent of party folks in his constituency have indicated that they will not vote for him in the primaries.

On John Kumah, the report indicated that only 34 percent of the party’s delegates are likely to vote for him in the upcoming primaries.

It is important to note that, almost all of the NPP MPs expected to lose their seats are from the Ashanti Region which is considered to be a stronghold of the party.