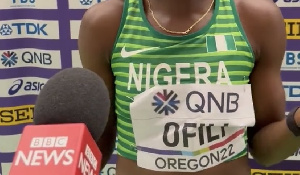 Nigerians recently celebrated the feat of Tobi Amusan, the athlete who made history at the just ended World Championship Games in Oregon.

Amusan broke the 100 meters hurdles world record when she run 12:12 seconds in the semi-finals before slashing that time further by 6 microseconds when she did 12:06 seconds to win gold.

Amid the celebrations, Nigerians had cause to worry when the country’s name was misspelled on the kit of some athletes.

Specifically on the kit of Ofili, a member of the 4×100 team. NIGERIA was spelled NIGERA. Incidentally it was rightly spelled on the kits of the others.

Ofili was part of a quartet comprising Rosemary Chukwuma, Grace Nwokocha and Joy Udo-Gabriel. They broke the 30-year-old African record of 42.39secs in the women’s 4x100m relay set by Christy Opara-Thompson, Beatrice Otondu, Faith Idehen and Mary Onyali-Omagbemi at the Barcelona Olympic Games in 1992.

They ran a new 42.22secs to finish in fourth position behind USA, who beat Jamaica and Germany to take the gold.

Nigerians took to Twitter to express their displeasure at the wrongly spelt name.

Steward Godwin wrote, “Which one is “NIGERA” again na? Shirt designer, you had just one job, just one!”

“What in God’s name is this, How come Nigeria’s kit at the World Athletics Championship bears “NIGERA”. A country with administrators that doesn’t even care abt integrity,” @iamsirdeli commented.

Ayo-Ben-Niji wrote, “Which country is NIGERA or it is just one of our many carelessness that have resulted to this?”

Another user, @mr_nalie queried Nike and the Sports Minister, Sunday Dare, “Is it that Nike made this kit for us to wear at a world championship then spelt Nigeria wrongly or Sunday Dare hired our brothers from Aba? Does it even mean the man in charge still insisted the athlete wore “NIGERA” after seeing the error. What a nation!!!”

However, in response to the outburst, the Secretary-General, Athletics Federation of Nigeria Secretary General, Adisa Beyioku, said, “It is really disheartening to know that a few Nigerians could shift their focus from the incredible feats our athletes performed in Oregon, which attracted commendation from the President, Muhammadu Buhari, to a factory error made by giant sportswear and equipment company, NIKE, and which affected just the vest Ofili wore at the championships.”