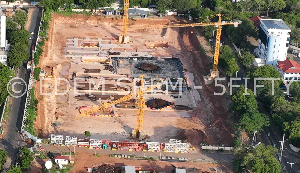 It has emerged that the project contractors of the National Cathedral, RIBADE Company LTD, have allegedly sacked over 200 of its workers over a lack of funds.

In a letter dated March 14, 2022, making rounds on social media, the company asked the workers to return every property in their possession to the Human Resource office.

The letter, signed by the company’s project manager, Grant Ramsay, added that it was only complying with portions in the contract which enjoins them to mitigate costs since they were not receiving funds for the project.

“Due to the lack of payment from the National Cathedral of Ghana which has resulted in the project being suspended, RIBADE COMPANY LTD is required under the contract to mitigate costs,” part of the letter read.

“This notice of termination takes effect on the 14th of March 2022 you are therefore requested to hand in all properties (i.e safety equipment, etc) belonging to the company in your possession to the HR office by close of work of the same day” the letter concluded

Making the allegations on his social media page member of Parliament for North Tongu, Samuel Okudzeto Ablakwa, said they[project contractors and sacked workers] are all shocked at GHC200million revelations which are said to have been expended by the government on the project.

Mr. Ablakwa has in recent times alleged that the Akufo-Addo-led administration has so far dolled out over GH₵190 million in funding for the construction of the National Cathedral.

His comment came after a recent report that the government has released an amount of GH₵25 million for the project.

In a post on his social media handle, Mr. Ablakwa said the government had earlier released an amount of over GH₵142 million bringing the cumulative funding for the project to GH₵199,832,603.00.

He detailed that this latest amount was concealed from Parliament and was additionally hidden from the Auditor-General in his 2020 audit.

Previous Alleged encroacher of CSRI land at Frafraha arrested
Next Vivid breakdown: How many divisions the National Cathedral will have