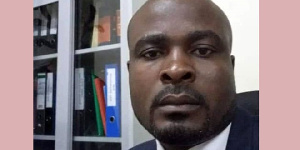 The body of Robert Kifunga Aguma, 43, was on Saturday morning found along Gabata cell-Mpumpai cell footpath near Bimala River lying supine and barefoot.

Rwenzori west police spokesperson, Mr. Vincent Twesige, said the body did not have any injuries, except the tongue protruding but was quick to add that detectives had started investigating the cause of death.
He said the case was reported to police by one Godfrey Bisimo, a village chairman of Bimala cell Kanyansimbi ward, Bundibugyo Town council.

“Today (Saturday) morning at around 9 am, we received information from the chairperson of Bimala village that a person had been lying dead near the Bimala River along Gabata cell-Mpumpai cell footpath via Kudos guest house,” Mr. Twesige said.
Later the deceased was identified as Aguma whose body was then taken to Fort Portal regional referral hospital for postmortem.

The district NRM electoral commission chairperson, Ms. Jane Alisemera, said Aguma’s death is not only a big loss to the district but the entire NRM fraternity.
“It’s very sad to lose such a young brilliant leader. Counsel Kifunga has been a good leader in our party and has contributed much to the NRM leadership countrywide. We are waiting for a post-mortem report to establish the exact cause of his death,” Alisemera said.

Last September, Ntoroko District NRM chairman, Japheth Kabagambe Ahebwa was kidnaped from Fort Portal, killed and his body dumped at the banks of River Mpanga at the border of Kamwenge and Ibanda.

Three suspects believed to be Killers were later traced and arrested by security operatives with the help of CCTV cameras.

In October, they appeared before Army court chaired by Lt Gen Andrew Gutti who charged them with kidnap, murder, aggravated robbery, and unlawful possession of ammunition before they were remanded to Kitalya prison.

The murder of Ahebwa was after his predecessor Vincent Mugume, 2019 the then chairperson, was also murdered in Tooro Semliki Game Reserve Ntoroko district.

Previous Free SHS policy producing quantity, not quality – Prof Addae Mensah
Next Seek permission before you use my picture for billboards – Wontumi warns