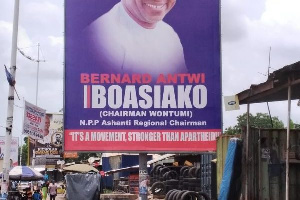 Seek permission before you use my picture for billboards – Wontumi warns

Chairman Wontumi, the Ashanti Regional Chairman of NPP has expressed his indignation and dissatisfaction to a volunteer group who have erected billboards at vantage points with his pictures in the metropolis to recontest his position.

He has asked persons ready to campaign for him to seek his permission before making any move that will go against the party’s rules.

According to his aide, the outspoken NPP chairman will soon take action on the move which he is not happy with.

“He might ask his guys to demolish all the billboards soon,” Duncan Bombay told Peacefm.

Tags before BILLBOARD MY PERMISSION SEEK USE WONTUMI