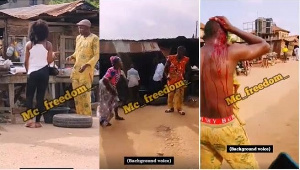 A video skit went horribly wrong during a shoot after things took a drastic turn.

The actor who posed as a herbalist wanting a virgin lady in a market area attracted a different reaction from residents.

The residents who were not informed that the man was an actor descended on the young man.

After making his demands which frightened the residents, the people took sticks, machetes, and other weapons to hit the man, smashing his head in the process.

By the time his crew showed up to save him, he was severely beaten to a pulp with blood gushing out of his head.

Some viewers cautioned skit makers to desist from such pranks as this was a lesson for all.

Below are some reactions;

@Olaoluwa Ige Holla
You guys should stop all this senseless skit all in the name of fame and money.

@Stephane Bahel
when you see white people doing their jokes on social media you think you can do the same in Africa. Black people don’t react like white people. Don’t push jokes far because you need likes on social. This one was advice for you and others. I hope you learn about it.

@Thompson Samson Adeola
I am happy with this scenario, we always take advantage of rubbish to make money in this country, this will be a lesson for others most especially that guy the use to remove wigs, but I pray that one day he will remove my wife’s wig.

@Chinenye Michael Umeji
Hahaha hahaha my belle ooh…stop all this expensive skit you won’t hear, people are hungry and angry at the same time in this country they will use that anger to finish you
E remain that guy that wears a long gown always pulling ladies wig
Better go Thanksgiving that they didn’t kill you there
Rubbish skit.

@Blacksam Uzor
Reminds me of a guy who got shot during a skit, you must first observe the kind of ppl around before you run some skits if possible, a mob has no conscience and is driven sometimes by the emotional condition of the society… Thank God u survived. On the other hand, those who witnessed this event might be tempted to play down real horrid events with the “staged” mindset.

@Hon Dan Ayantunde
He deserves it. How can they be doing a skit to the detriment of someone’s life? They didn’t even bother to stop when the lady passed out.

@Tobi Goodness Akanmu
I don’t really enjoy skits like this…
We are in a world that looks that way and anything can happen with respect to that in real life…
And more overdoing skit like this in a market area among those women will just give you hot serve and skit doing shouldn’t go longer that way…
Well, I hope a better skit will earn you an award someday so you can tell your story.