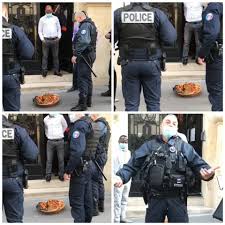 A video of a sacrifice in a calabash, locally called Juju, sitting outside the entrance of the Nigerian Embassy in France has been shared online.

In the video, which went viral over the weekend, French policemen were called to the scene to remove the Juju.

But rather than being helpful, the policemen themselves looked confused.

The three officers moved away, except for one officer who was seen chatting with two men who stood close to the Embassy.

However, there was no information from the Embassy on the identity of the person who placed the juju in the secured building.

Related Topics:JUJUNigeria embassy
Up Next