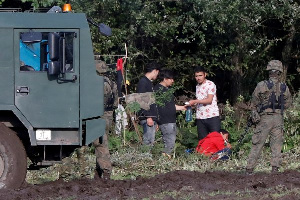 The soldiers found the body of the man, a backpack and a Nigerian passport in a forest near Olchowka on Tuesday, a police spokesperson told the PAP news agency.

The body was found about nine kilometers from the border, according to the report.

It was not yet clear who the man was and whether he was the holder of the passport.

Several people have died in the border area where migrants and refugees have been trying to cross into the European Union, in a crisis widely believed to have been orchestrated by Belarusian ruler Alexander Lukashenko.

The EU accuses Lukashenko of flying people from crisis regions into Minsk and trying to smuggle them into Europe, to destabilize the EU in retaliation for sanctions – charges that he denies.

The governments of some of the countries affected have responded by setting up barbed wire fences to prevent migrants from entering.

Poland’s border guards said on Wednesday there had been 51 attempts to cross the border illegally within the past 24 hours. A group of 35 migrants broke through the border fortifications near the village of Czeremsza and advanced several meters into Polish territory, the report said.

Immediately withdraw your directive to Goil; it’s dangerous and unfortunate — OMCs to government