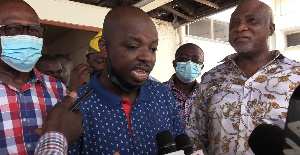 Charged with two counts of publication of false news and offensive conduct, Abronye DC, who was arrested on Tuesday, February 15, 2022, was arraigned before an Accra Circuit Court on Wednesday.

According to the police, the decision to arrest Abronye followed his failure to substantiate claims of a coup plot he made against former President John Dramani Mahama.

The court, when he was arraigned on Wednesday, admitted Abronye to a bail sum of GHC100,000 with two sureties.

Speaking to the media after meeting his bail conditions, the loudmouth Bono Regional party chairman described his arrest as a populist act orchestrated by the Inspector General of Police, Dr George Akufo-Dampare.

He however emphasized that his arrest will not in any way change him as someone known for voicing out his opinions.

“What I would like to say is that no amount of these populist incarcerations will injunct me from voicing out or speaking my mind,” he stated.

Tagging his arrest as an attempt by the IGP to settle personal scores, Abronye disclosed that he will in the coming days disclose the real issues between him and the chief of Ghana police.

He further justified that beyond having personal issues with the IGP, he has become a victim of the populist actions of Dr George Akuffo Dampare.

“I’ve used the word populist because the exercise of the IGP for some months now has been described as populist and same has happened to me. So from tomorrow going I will come out publicly to speak to the people,” he stated.

On the decision by the court to admit him to bail, Abronye expressed delight saying his misdemeanor offence coupled with his decision to honour an earlier invitation by the police made the suitability of the court to deny him bail imprudent.

“And its not that the police was searching for me. I personally went to the regional police office yesterday and around 12:50 thereabout I finished writing my statement. And they deliberately delayed me in order to put me in police custody but as a politician I am not afraid of these things,” he added.

Abronye was invited by the police on Wednesday after a video of him making some allegations against former President John Dramani Mahama had gone viral.

He had alleged during an interview that the former president had linked up with terror group Al Qaeda to stage a coup in Ghana.

But according to the police, it established after interrogating Abronye that his allegations were untrue.