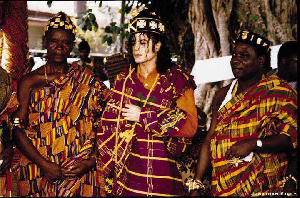 Why Michael Jackson was crowned chief in Ivory Coast in 1992

His trip was triggered by supposed DNA tests and mystic messages that suggested that he was a descendant of the royal Sanwi clan.

Mentalfloss.com, an entertainment news site reported that the colourful event was well attended amid “dancing and the frenetic sound of traditional Agni drumming.”

It continued: “The star wore a traditional toga-style cloth and sat on a golden stool under a sacred tree as Agni chiefs took turns to crown him.”

Jackson signed documents to that effect and undertook some humanitarian activities before leaving his ‘ancestral homeland.’

Asked about his Ivorian royal feeling, he answered: “I never try to think hard about it because I don’t want it to go into my head. But, it’s a great honour.”

In 1995, he invited the head of his spiritual father Nana Amon Ndoufou IV, who ld his coronation, to Los Angeles and took him to the Universal Studios.

Little wonder that when Jackson died in 2009, the people of his ancestral homeland held a two-day funeral for the global pop icon.

Tribe members even asked Jacko’s family for his body, hoping they could give him a royal burial but Jackson was buried in Southern California, a 2019 report by the Sun UK noted.

Another Jackson has been replaced on the stool left behind by Wacko Jacko as he had come to be known. The successor is minister and politician Jesse Jackson, he was crowned in 2009.

Tags 1992 chief COAST crowned IN IVORY Jackson MICHAEL WAS WHY