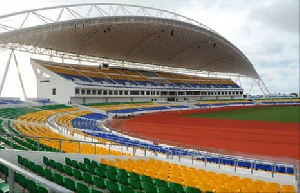 The Ghana Football Association President, Kurt Edwin Simeon Okraku, has admitted the Black Stars were close to hosting the Super Eagles in the first leg of the World Cup playoff outside the country.

Kurt Okraku sadly disclosed that the country cannot host an international game without the approval of FIFA/CAF due to the sorry state of stadiums in Ghana.

Ahead of the playoff against Nigeria, there were reports the Black Stars could play their home game in Benin or Morocco after the Cape Coast stadium was left in poor conditions following the Independence Day parade.

However, the Ghana Football Association had to send a request for the game to be played in Kumasi under various conditions, some of which included making sure the pitch was in shape for the match.

“If you heard Black Stars could’ve played Nigeria outside Ghana, it was true. As it is now, if we have to play an international match, no stadium in Ghana can host it. Not Baba Yara or Cape Coast. CAF must send in an inspection team first,” he said on GTV Sports Plus.

The FA and the National Sports Authority had to work around the clock to ensure Ghana played in Kumasi.

Kurt Okraku used the opportunity to also applaud everyone who helped in getting the game played in Ghana.

The Black Stars held the Super Eagles in Kumasi to a goalless draw before travelling to Abuja to play a 1-1 draw which secured Ghana qualification to the World Cup.

Tags AN CAN GHANA HOST IN international NO STADIUM