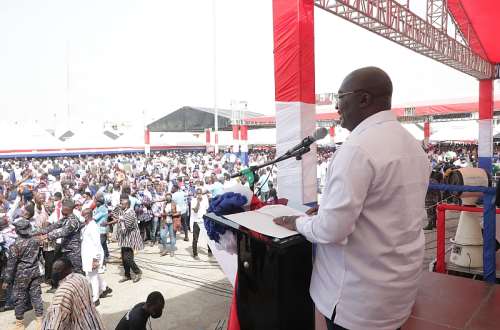 The Vice-President Dr Mahamudu Bawumia is confident that the New Patriotic Party (NPP) will become the first political party in the Fourth Republic to break the eight-year power cycle.

The Danquah-Busia-Dombo tradition has been in power since 2016 and will complete its second-term of the Akufo-Addo government in 2024 when a general election will be held.

Speaking at the annual national delegates’ conference of the NPP in Kumasi on Sunday (19 December), Dr Bawumia said although “breaking the eight will not be easy”, he is very optimistic that “for the first time in our history we’ll break the eight.”

According to him, the NPP has a superior record as compared to the opposition National Democratic Congress (NDC) hence it is in a pole position to remain in government after the 2024 elections.

“I believe if we’re united we shall break the eight. Our success will depend on how we conduct ourselves. We must not take down each other, but rather the NDC whose return will be a disaster for Ghana,” Dr Bawumia said.

He added: “The NPP has a solid record of achievement in the Fourth Republic. Our party has become the most important driver of the Ghanaian vision and development agenda. We have been responsible for the most important policies which touch every Ghanaian in every corner of our nation, the NHIS, the school feeding program, the free antenatal services, the Free SHS, the free TVET program etc.

“As we meet here today at Conference, we are reminded that it is the party that birthed the government. Thus, strengthening party-government relations is key to our collective success.

“I believe that Insha Allah we will be able to break the eight because our record is a superior record. Whether we are talking about agriculture, industry, roads, housing, education, health, transformational policies like digitalization, social interventions and so on the comparison between us and the NDC will be like night and day.”

“It is important to acknowledge that we in the NPP have not solved all the problems facing Ghanaians but we have solved many problems and we have a plan we are working to. Afterall, we are only in the first year of a four year mandate which was given to us at the end of last year.

“The COVID-19 pandemic has increased the cost of living virtually everywhere in the world including countries like the US, UK, Germany, Japan, Nigeria, Cote d’Ívoire, etc. and Ghana has similarly been affected.

“Nevertheless, it is important to remind ourselves that notwithstanding the global economic adverse impact of the Covid-19 pandemic on economic growth, debts and deficits, at the macroeconomic level, Inflation in Ghana today at 12.2% is lower than it was in 2016 (15.4%).

“For the first time in over two decades, the trade balance (the difference between what we export and what we import) recorded a surplus for four consecutive years from 2017-2020.

“Our record of creating jobs (over 750,000 jobs) is vastly superior to the record of the NDC government which froze public service recruitment. So if our performance on the key macroeconomic indicators (inflation, interest rates, depreciation, external reserves, trade balance and jobs) during the worst global pandemic in 100 years is better than your performance without such a pandemic how can you say your economic management is better?” Dr Bawumia stated.

Related Topics:BAWUMIAbreak 8NPP
Up Next

Akufo-Addo has made Ghana better than UK and US – Wontumi