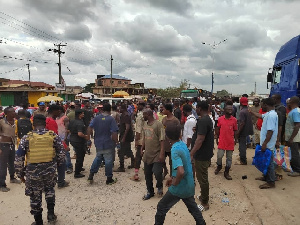 Kwame Governs Agbodza, the Member of Parliament for Adaklu has alleged that a July 18 protest against the Majority Leader and MP for Suame, Osei Kyei-Mensah-Bonsu, was staged.

According to him, the protest which on the record is against the bad nature of roads in the Suame Constituency especially the Magazine area, was planned in order for the governing New Patriotic Party, NPP, to push through funding related to the project.

“Ignore the so called demo at Suame regarding bad roads. It was planned and executed by the npp to fast track the approval of millions of euros to build a 4-tier interchange at Suame,” Agbodza said in a July 19, 2022 tweet.

Some artisans in the Suame Magazine area attacked the Majority Leader – hooting and pelting him with sachet water – when he arrived in the area to engage with stakeholders on the nature of the roads.

It had triggered protests last week with the promise that more was to come this week. Meanwhile reports indicate that road construction works on the bad roads commenced today, July 19.

Barely hours after Agbodza’s tweet, the government laid a commercial agreement in Parliament for the construction of the Suame Interchange and ancillary works, Citi News reported.

The agreement, laid by Deputy Minister for Finance, Abena Osei-Asare, was subsequently referred to the Finance Committee of Parliament for consideration and report back to the House.

The Akufo-Addo government has promised to build a number of interchanges in the Ashanti Region – the NPP’s vote bank.