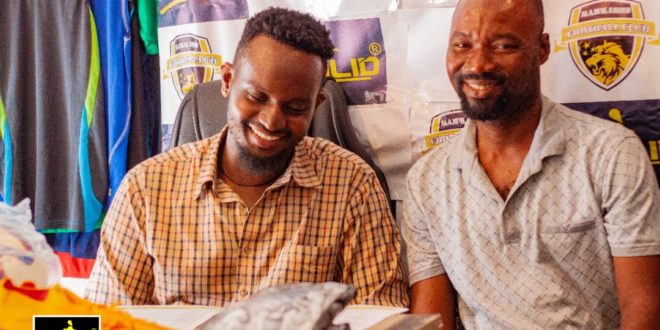 The sportswear suppliers is keen on growing its sports brand in the country and has in the last few years been forming alliances with a number of clubs. Last, the firm reached an agreement with former Asante Kotoko Captain and goalkeeper Felix Annan to sponsor him for the 2020/21 season while he serves as the Brand Ambassador for the company and Richard Atta as well for the 2021/22 season.

Following up on that, Ashlid Enterprise has today signed a deal with Lord Bawah Martey that will see them Sponsoring the new Dreams FC goalkeeper for the next one year.

Lord Bawah will receive numerous pair of goalkeepers’ gloves designed with his own specifications over the course of the year.

Free hoodies, T- Shirts and hats- will also be provided.

Asante Kotoko SC goalkeeper and 2019 SWAG player of the year Felix Annan is the brand Ambassador for Ashild Enterprise.

The company has also worked with Black and Hearts of Oak Goalkeeper Richard Attah.

In the past, Ashild Enterprise as a company, has been the sole supplier of quality footballs to almost all the juvenile clubs based in the country.

Adding to their growing portfolio, Ashlid Enterprise is the official headline sponsor of second division side Alajo.