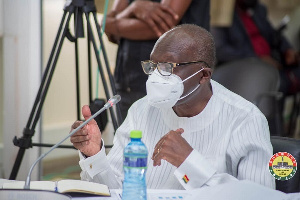 The Minister of Finance, Ken Ofori-Atta, has asked for a rescheduling of the question of Samuel Okudeto Ablakwa on the cost of President Nana Addo Dankwa Akufo-Addo’s recent trip to France, Belgium and South Africa in a rented aircraft.

The question was filed by Ranking Member of the Foreign Affairs Committee who considers the move by the President as “obscene profligacy”.

The North Tongu Member of Parliament (MP) had claimed in the two-prong question that the total cost of travelling in that aircraft owned by UK-based Acropolis Aviation was GH¢2.8 million.

On Wednesday, June 16, the Minister of Defence, Dominic Nitiwul, was in Parliament to answer his part of the urgent question.

“The decision to travel particularly to long and multiple destinations such as the president travelling to France, Belgium, South African and back to Ghana especially during this Covid time will always require a larger capacity aircraft such as a DBKJ or an aircraft ATJ 319 even when the Falcon is air ready,” the Bimbilla MP said.

But on Thursday, June 17 when Mr Ofori-Atta was supposed to come to the House to answer the question, it was missing from the day’s order paper contrary to its advertisement on Wednesday.

Second Deputy Speaker of Parliament Andrew Asiamah Amoako, who chaired proceedings, was told the matter came up during the discussion of the business of the day earlier and the Finance Minister requested a rescheduling of the question.

“So, Honorable Ablakwa I will persuade you that the question will be rescheduled and the Minister of Finance will come and respond to it, Mr Speaker,” Minority Leader Haruna Iddrisu assured.