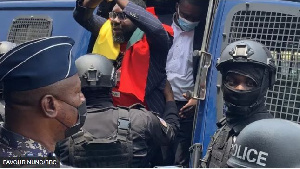 The Dean of the University of Ghana School of Law, Professor Raymond Atuguba on Monday, delivered a lecture which he dedicated to embattled activist and #FixTheCountry convener, Oliver Mawusi Barker Vormawor.

Oliver Barker has been in custody since February 11, 2022, having been arrested. He is facing trial on charges of felony treason.

Delivering a lecture on the state of the Ghanaian economy and its effect on constitutional processes, Professor Raymond Atuguba acknowledged Oliver Barker and the team of legal representatives who have been helping him fight his case which was filed at the Ashaiman District Court on February 14, 2022.

“This lecture is dedicated to Mawusi Oliver Barker-Vormawor, another junior brother of mine, for all his work in trying to #FixtheCountry and to reform our constitution.

It is also dedicated to my big brother Akoto Ampaw and Justice Srem-Sai, another junior brother of mine, and all the other lawyers and activists who are working around the clock to secure his release from unlawful detention,” he stated in the introduction of his lecture dedication.

Moving on, Prof Atuguba said that he had earlier visited the embattled activist in custody, and described his condition in cells as unfavourable.

“I visited Mawuse in jail some two weeks ago, and the conditions under which he was being held are not fit even for your worse enemy,” Prof Atuguba said.

According to the University of Ghana Law School Dean, it was not a coincidence that Oliver Barker’s second day of appearance in court was fixed for February 28, which happened to be the anniversary of the 1948 crossroads shooting – counted as part of the significant moments in Ghana’s fight towards independence.

Quoting portions of the Bible, Prof Raymond Atuguba said, “We live in a spiritual world. Like the Psalmist says, “the fool sayeth unto himself, ‘there is no God’. Sometimes, God speaks to us by timing events, rolling the cosmos and the elements and our actions to coincide with particular times and seasons, in order to give us a message. Those who have spiritual ears, let them hear.”

He concluded his dedication saying, “Let me end this part of my speech here, before | am arrested or before they send the tax authorities to come and find fault with my law firm ‘by force.”

Oliver Barker’s arrest, according to the police, was in connection to a Facebook post in which he threatened to “do the coup” himself if the controversial Electronic Transactions Levy currently a bill before parliament is passed into law.

According to the police, the statement by the activist on the proposed 1.5% E-Levy showed a clear intent on his part to usurp the government and overthrow the 1992 Constitution of Ghana.

His arrest among other recent arrests, has been tagged by some critics as a deliberate attempt by the government to silence critical voices.